Ok, this is a bit of cheating, because this one was not a proper Christmas present, but pre-Christmas. Koen’s brother had a baby at the end of October and I wanted to have something ready for him. After searching around on Ravelry I settled on two beautiful patterns that would make useful garments: Puerperium and Aviatrix.

They also seemed easy and simple enough to be able to finish them even before time to be able to continue knitting other things. But I made a terrible mistake. I did not use the best wool for this.

I always try to support our LYS, but I have to confess that most of the times I buy wool there, I am unable to finish my projects, and when I do it, I am terribly unhappy about them and they are doom to rot in a drawer or inside a bag forever and ever. The problem is always the same: Katia. I am sorry, but I really hate this brand. I dislike the colours, the texture, and this year they didn’t even make a 100% wool yarn. What the heck is this? Sadly this is what you find in almost every shop in Spain plus tons of acrylic everywhere. I understand that if you didn’t see better wool in your life, you can live with it. But I’ve seen it, and I’ve used, and I learned to appreciate it, and also to dislike crappy stuff (I’m such a snob!).

But this time, like the others, the girl behind the counter (somebody I appreciate) convinced me again of the fabulous colours of the last yarn they got. I was not sure at the beginning that Katia Merino Classic would be suitable for babies. The colours were a bit dark and strange. But soon enough I was tempted by a greenish yarn. It was only 52% merino, but it was superwash, something the parents would appreciate. And I fell down for it.

I want to make clear that her intention was not to trick me. Many times I went there while I was knitting something made of malabrigo “whatever” and she admired the wool not even knowing that something like that existed. It’s the same thing again and again. It’s like many people here haven’t seen anything but the most well known wool produced here. I am a bit amazed that this even happens among professionals, but it’s like that.

In conclusion: I knitted my Puerperium and I immediately saw something that did not convince me. I couldn’t put my finger on it, but it was definitely something. Then I went for the Aviatrix and I couldn’t finish it. I had troubles with the wraps and turns, the yarn was very splitty and I was bothered by halo. When I was almost done I realized that I’d accidentally dropped a stitch several rows before. At that moment I wanted to throw the hat against the wall. It was then that I decided that I hated the yarn and that I had waisted my time. 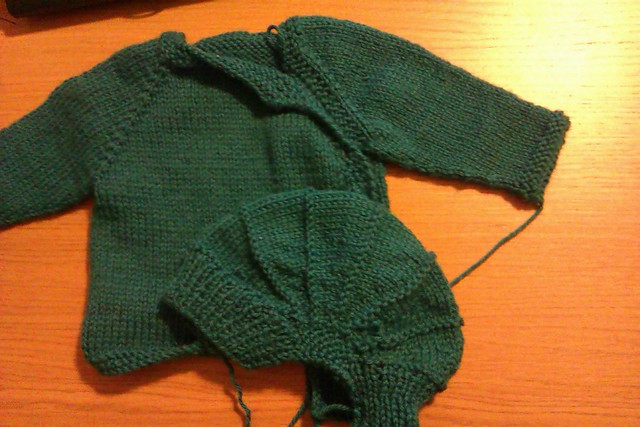 After some Ravelry research I found the yarn that I wanted for this two items. And after some more research, I found out that some colours were sold by a shop here in Madrid not very far from my place. So there I went and I immediately loved the yarn. It was Artesano Superwash Merino. It felt very soft, the colours were creamy and it was almost as neat as cotton but with the elasticity of wool. That was a win.

I knitted the cardigan and the hat with half the effort of the first time. They looked great even before blocking, they were super soft, looked durable and were machine washable. Now they were perfect! 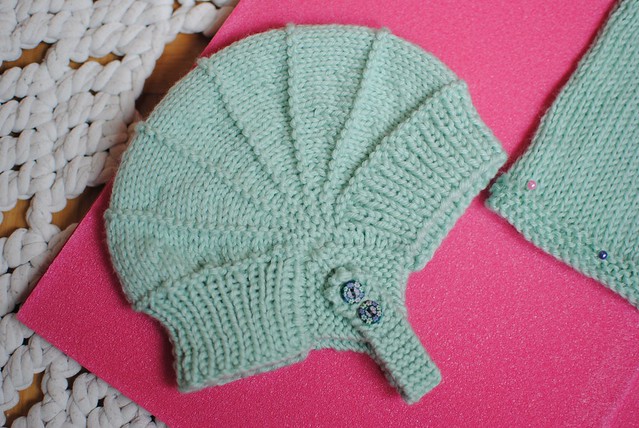 For the hat I used shadow wraps instead of normal wrap and turns. They looked better to me since the wraps were not that evident. 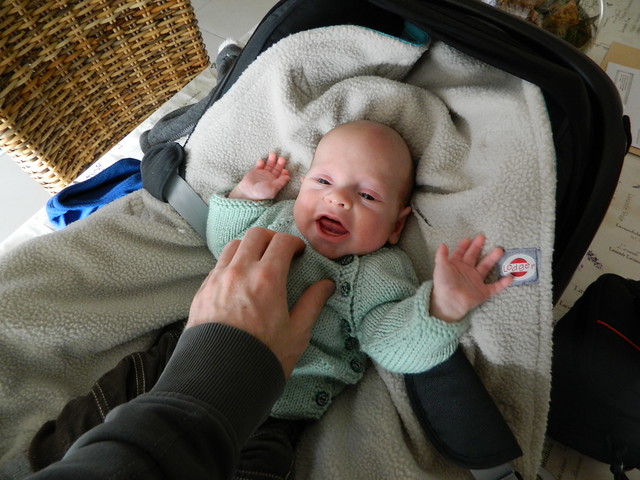 Koen liked the wool so much that he asked for a hat with the same material but a different colour. But that is for another post.