One thing was sure: I had to knit another scarf for my mother and give it to her as a Christmas present. Just after she had her surgery, in September of 2010, she started using scarves and shawls to conceal that horrible T scar. It’s when I started the tradition of making her a new scarf more or less every 3 months. It doesn’t matter that after a while she gave up on this and started to show some cleavage. I persisted on it, since she still wears them in Autumn and Winter.

After some trial and error, I found out the style she preferred. When skyping with her, I found her often wearing the Butternut Scarf or the Saroyan I made for her. So it had to be something more or less rectangular, soft, light and warm. I decided to go again for Malabrigo Lace, and this time it was lavender. After browsing for a while I found a pattern that met the requisites needed by my mother: Nashira.

Since it was a lace scarf I knew that it was going to take me some time and a bit of concentration. That was what delayed it a bit. I like to watch something while knitting: movies, TV shows, … When I started with it I could not do it because I had to focus on the pattern and that made the knitting periods shorter. I discovered that if I’m not distracted watching something, talking or listening to someone, I get tired faster. So the periods where shorter than they should be. Soon I improved my multitasking and started to watch videos again and from then onwards it started going faster. I have to say that I did not have to unravel more than 1 row due to screwing up. The middle section is quite repetitive, and once you get the hang of it it goes like a bliss. The ends are a bit more elaborated but since it’s a rectangle and all rows have the same amount of stitches, it’s not complicated (I still remember that I had to re-knit great part of the Ishbel because I had made several mistakes). 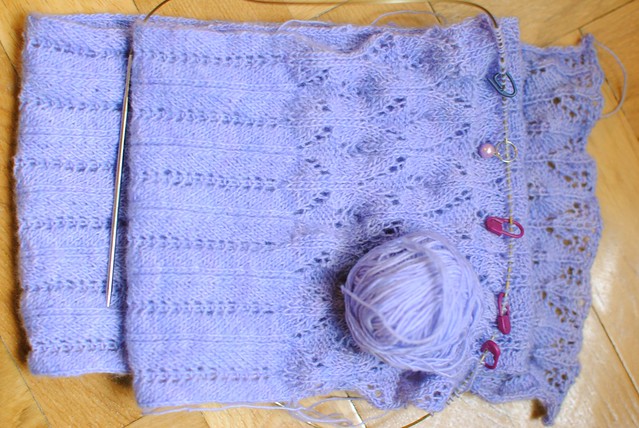 It’s a pity that I don’t have a picture of my mother wearing it, but with all the rush we forgot to do it until the last minute and then it was late and there was no time. I hope my sister takes a picture so that you can see how it looks like. 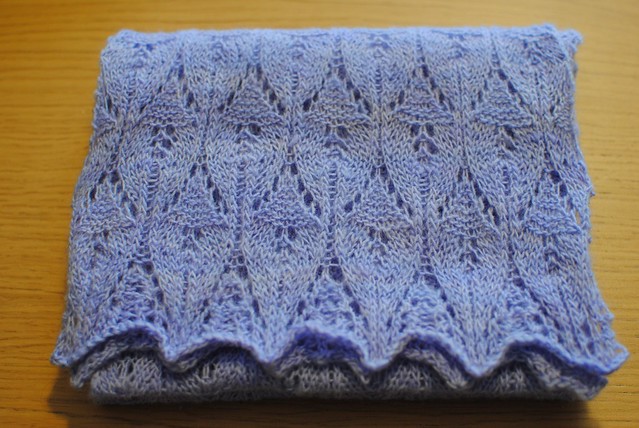