I had problems yesterday to be at ease and the night brought with it some more insomnia again. In the evening I couldn’t even focus on knitting a simple and boring scarf and I started spinning for a little while again. I think I’m getting the hang of it and …

We went to bed quite early on Friday. Koen was destroyed after a very hard week at work and lack of sleep and I needed some rest to recover from a bad cold. Koen fell asleep almost immediately, but I didn’t have the same luck. I was tossing and turning …

I have a problem with my blog. Some of you might have already guessed, especially if I left you comments on your blogs. Here is the thing.When I created the domain elenaknits.wordpress.com I did it under another username. It was an old name from an old blog I used to …

Koen’s mother told us last week that she went to visit Koen’s brother and his family. Koen’s nephew was wearing the Puerperium cardigan I made for him, but that it was probably the last time he could wear it; because, as little babies do, Sander is growing up fast. I’ll …

With enormous desires of learning new things this year and a secret crazy project on my mind, I’ve been searching for an online shop where I could buy this: Oh, yeah, I really want to learn how to spin. I tried an online shop that I already knew but they’d …

When knitting something for somebody else, one has to take into account that person’s style. Most of the times, especially if the gift is a surprise, it just goes down to trial and error, and after some knitted gifts one can more or less estimate what to make and how …

This past weekend I couldn’t dedicate too much time to my knitting due to the Swing Madrid Festival. Seven hours dancing on Saturday plus two on Sunday left us brain dead. I managed though to block Émilien and Freija. Émilien is done, but I have problems to find a zipper …

I started my crafty life just crochetting. I looked at amigurumis on internet and I discovered that I wanted to make something like that. After a while I accomplished this and then I decided that what I wanted to make were garments. Soon I figured out that knitted garments usually …

This pattern is also offered as a downloadable PDF at Ravelry. This is intended for an HTC Wildfire S (10 x 6 x 1.3 cm). For any other model of cell phone, the pattern will need to be adapted according to the specific measurements. This idea occurred to me after making …

I offered to test this for my friend Ivana who requested some knitters to help her with her beautiful design. I own a Kindle and one of the things I wanted to learn this year was colorwork, so this project was perfect for me. I had lots of Cascade 220 left from Émilien, and I was stranded in Tenerife with a bunch of ill people so it was the time to go for it.

I loved those quiet mornings. I used to get up one hour earlier than the rest and have that time for me and my knitting. The apartments were still silent and the sun was still rising. One could do lots of knitting, counting stitches and also design new things in the middle of that peace.

Playing I Spy with my niece and calculating to modify a pattern is not a good combination. I started colorwork after 13 cm from the cast on edge  when it should have been 14 (the pattern called for 11.5) but it would have been too tight anyway I think. After this mess I luckily did one mod right to center the pattern by adding stitches at the beginning and end of the colorwork on both sides.

This was my first real colorwork. I got used to it pretty fast since I started knitting being a thrower and I soon became a picker, so holding two strands of yarn with both hands comes naturally to me (I confess I started the colorwork while I was in the back seat of a car going somewhere). It all seemed too beautiful to be true, and in fact it was. I discovered that I have a tension problem while knitting colorwork, and that part is not stretchy enough.

The first problem I saw was that I kept the yarn too tight when bending to the other side at the end of the round, but that was not the only problem. All my colorwork looked wrong when inserting the Kindle. After a bit of reading I tried new things. I tried then not to cram up the stitches on the right needle to have looser floats. It seemed to work better but I still had problems with floats from one side to the other. It worked more or less if I changed color at that point redistributing stitches but it was not very practical. After researching a bit, the best solution for colorwork with magic loop is having the work inside out (I think this is going to be one of the main discoveries for me this year). 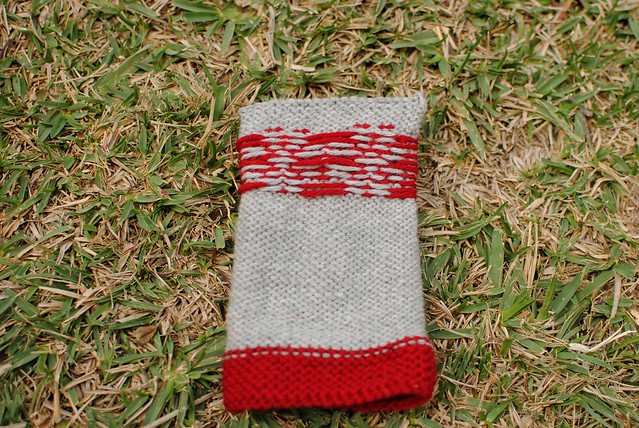 I have to thank Tasha for her wonderful posts on colorwork. This couldn’t have been done without her help:

After finishing the sleeve it seems to fit my sister’s Kindle instead of mine. Hers is a 4th generation Kindle, like the one in the pattern, so I’ll give it to her.

PS: My sister and my mother are fighting over this Kindle cozy. I’ll have to make more!