This past weekend I couldn’t dedicate too much time to my knitting due to the Swing Madrid Festival. Seven hours dancing on Saturday plus two on Sunday left us brain dead. I managed though to block Émilien and Freija. Émilien is done, but I have problems to find a zipper with the right grey tone. Monday was bank holiday, so I set to the task of sewing the buttons to Freija. Wow, beautiful and adequate buttons; I don’t get tired of looking at them! 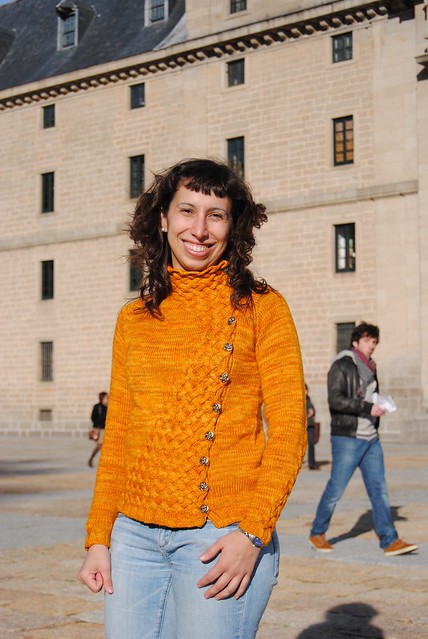 I wanted to make this cardigan for ages, almost since I started knitting. I started last year with a yarn that turned out too thick for it (Malabrigo Worsted Merino) just because I was too lazy to read the pattern twice. I finally got the right yarn just before Christmas and I casted on in the train back from my Vigo to Madrid (6 hour trip) at the beginning of January. I temporarily paused this project to work on Émilien and it seems I finished both almost at the same time.

I used the wonderful yarn Malabrigo Rios. It was the first time using this one and I am sure I will use it again and again. It’s beautiful, warm and incredibly soft. Like other supper-wash it feels a little bit like cotton, but with some elasticity. It has nice drape and it seems more durable than Malabrigo Worsted Merino. At least I don’t think it’s going to pill like that one. We’ll see with time.

I made size 33” and decided to remove the bobbles. They didn’t add any beauty in my opinion and I can see them easily caught in zippers, hooks or anything sharp, ruining the cardigan. I would have maybe narrow a little bit the waist, but I think it’s a problem of mine. My waist is quite thin and most sweaters are a bit loose there. Anyway I think it has a great fit. It grew a little bit after blocking, and the neck fits perfectly now. I was a bit afraid of having narrowed it too much, but at the it has just the right size.

I  modified the sleeves, making them much narrower. I did like the original, but it felt to me more like a jacket or a coat and I prefer fitted sleeves for normal cardigans (that I can wear under a coat). This is how I modified them:

The pattern calls for a three needle bind off for the underarms, but that adds a bit of bulk that I don’t like and doesn’t make sense to me in a seamless cardigan, so I just grafted and I can say that it looks neater to me.