When knitting something for somebody else, one has to take into account that person’s style. Most of the times, especially if the gift is a surprise, it just goes down to trial and error, and after some knitted gifts one can more or less estimate what to make and how to make it for that person to be successful.

I have made several scarves/shawls for my mother:

I don’t see my mother very ofter because we live 600 Km apart (before it was nearly 3000), but we talk to each other from time to time on Skype. And during the winter period I see her wearing a couple of those scarves. Guess which ones… Saroyan and Butternut Scarf. Why is she wearing these but not the other ones? These two are soft, warm, light and they have rectangular or pseudo-rectangular shapes. They also seem casual (my mother dresses nicely but she’s not very party-like) and one doesn’t need to be very careful when putting them on. You can just make a knot and go.

I’d really put my bet on Rhombuses. It also looked casual and nice for spring, but I think she never wore it. When she first saw it she exclaimed that it was perhaps a bit too large and heavy (it’s make of cotton). So large and heavy scarves are out of the question. I should also mention that my mother is on the petite size.

Ishbel is beautiful, but I made it in September, out of a cotton-rayon blend, and then the winter came. The fabric just felt cold to the touch and then I also realized that triangular shawls are not the most wearable ones. They can feel a bit awkward if you are not used to them. So no more triangular shawls for my mother.

So in conclusion: Small, rectangular and not heavily blocked or with a too delicate appearance.

I really wanted to make the mini-Hawthorne for her, but I know it will be a fail and she will never wear it, so I am trying Clapotis this time in a green color that I know she loves (her favorite). I have delayed this for a little while because this shawl seemed a bit too simple (and the mini-Hawthorne so gorgeous), but that’s maybe what my mother prefers, so I decided to give it a try. The original design is a bit too large (I’m not making the same mistake again) so I’m making less repeats and we’ll see what comes out. It’s the first time that I use dropped-stitches, and I have to confess that it gives me a strange feeling. As I’ve mentioned, I want to learn new techniques along this year. At least this project fits the bill. 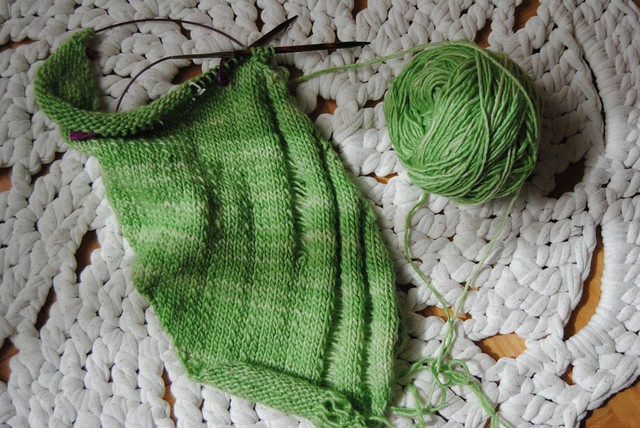