I started a class about pattern drafting almost 1 year ago. My first project was a skirt of which I’m not especially proud. It’s an ok skirt, but it’s not exactly what it was meant to be, and now I feel some basic concepts were not explained during the class (or at least I was not aware of them). Because of that and because of my great behind I haven’t made any more skirts until very recently (dresses with circle skirts don’t count).

After a lot of thinking I decided to join this Craftsy class. It’s about designing and sewing your own A-line skirt. I was a bit afraid that I was going to pay for something that I already knew and that it was going to be worthless, but I couldn’t be more wrong. There were three concepts that were pretty basic but that also were eye-openers for me:

After a couple of muslins this is the result: 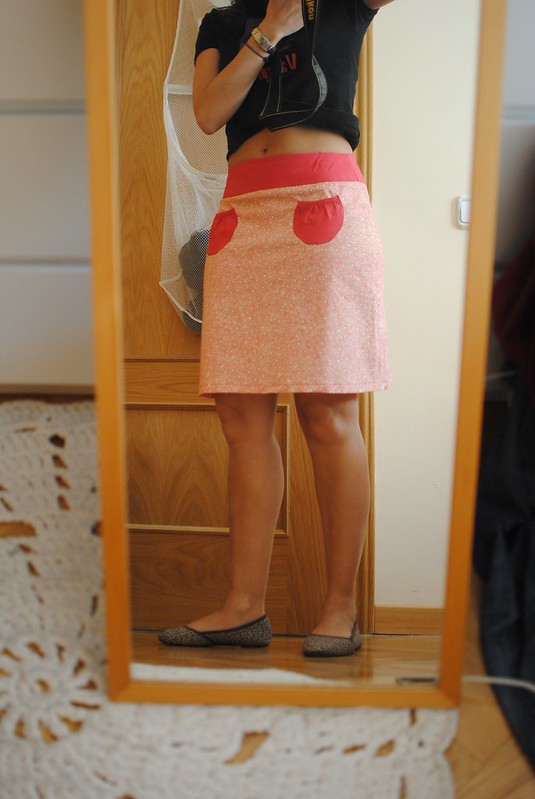 I think the fit is quite good and those muffing pockets are adorable. I’m definitely making more of this for this summer.

Following the instructions of the class was very straight forward, simple and clear. Deborah Moebes makes everything look so easy, you just want to jump to your sewing machine and start sewing.

I confess that I had a bit of trouble designing my skirt due to my pear shaped body, but taking into account the square angles concept, I could draft a quite good pattern.

When I started this blog, it was almost exclusively about knitting. I always wanted to learn sewing and I’ve been doing some since last year, but getting my own sewing machine was the real starting point. The only problem is the invest of money a new hobby requires: acquiring the tools and knowledge. Between that and all the ideas flying in my head about future designs I’m getting a bit stressed. I think it could be due to the different nature of sewing compared to knitting. Knitting is a very slow process, so slow that you sometimes forget what you’re doing while you keep knitting stitch after stitch, it becoming an almost mindlessly process while you’re watching TV. With sewing it’s very different, because it can be very immediate; a skirt can finished in one or two days. And some of the process can’t be done in front of the TV. You need to get up from your chair, measure here and there; and the sewing machine is a lot more noisy than your knitting needles, even if they are metallic. I have the impression that it just takes more of my attention and it can become a bit obsessive. I’ve already had some insomnia nights just thinking how I’m going to make this or that, how I’m going to cut that fabric, how the final garment is going to look like.

I guess I just have to take it easy and try to switch between sewing and knitting to try to avoid becoming obsessed by any of the two. But you know, I’m queuing up so many projects in my mind that I could have a complete wardrobe. And I also would like to learn embroidery!

Note: I want to make clear that I’m not getting paid for writing this post. These are just my honest thoughts about the class.