Last weekend I finally decided to start working on a bikini. I bought half a meter of two beautiful fabrics (a nice one to make afirst attempt or muslin and a nicer one to make a second  and definitive bikini) and a meter of a fleshed color bathing suit lining. The bathing suit fabrics were on sale at less than €5 a meter and the lining at €6.50. 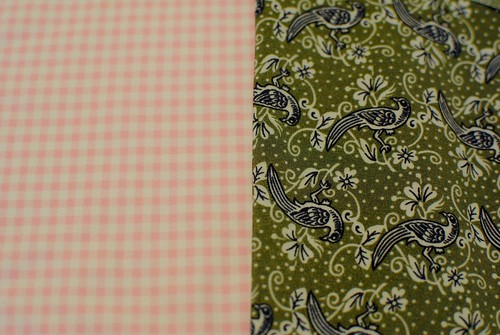 As I enjoy making my own patterns and it is sometimes the best way to make something that matches your measurements, I followed the instructions described at the Pattern School. I traced first the bottom part of the one piece block and then I started to make the modifications to transform it into cheeky shorts. The patterns looked big on the paper, but I cut the fabric anyway, because in my experience patterns tend to look large when in fact they are not, especially after adding the seam allowances. But the result didn’t work. At all. It didn’t come large, it came huge. I thought of trimming 3 cm from each side but anyway I was not totally happy with how it fitted, so I decided to make my second option, that pattern so much pinned on Pinterest.

I was not completely convinced by the picture since the bottoms looked a bit floppy on the front (to my liking, eh). But after my  completely failure I made the pattern for the bottom without almost any modification. I omitted the front elastic, so I modified the waist front to be completely straight instead of curved upwards to compensate for the elastic placement. I thought of making it a bit higher on the waist, but hey, better to try this one, treat this bikini as a muslin and make the correct modifications for the second bikini. 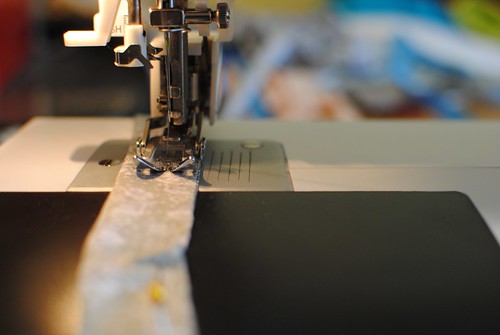 I had some issues sewing the lycra. I used my walking foot and a stretch needle and, after a bit of fiddling, it was mostly ok, but the real problem came when I had to stitch through the lycra and the elastic (I used bathing suit rubber, the one that smells like new bathing suits). I had a lot of tension issues. Take the bobbin out, make sure everything is fine, put the bobbin in, try with a scrap of fabric, take the bobbin out again, and like this to the infinite and beyond. I changed the waist, placing the elastic in between both fabrics. I don’t know if I really prefer this. I’m still not sure what I’ll do next time. I also didn’t use a different thread for the bobbin and the inside of my waist looks shabby, but it’s just a muslin and nobody is going to see the inside. 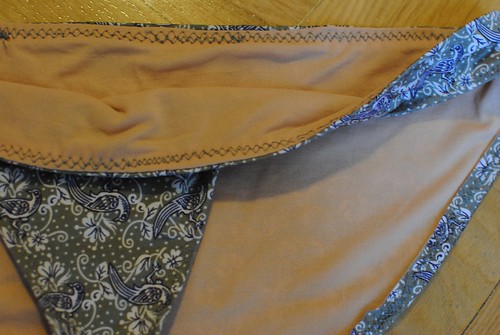 I tried to use my twin needles for that part and also for the leg openings, as a finishing, instead of using a zig-zag, but it came wrong. I blame the needles for not being stretch but regular ones, for they kept on skipping stitches. I gave up and made a zig-zag, which looks better than I expected. 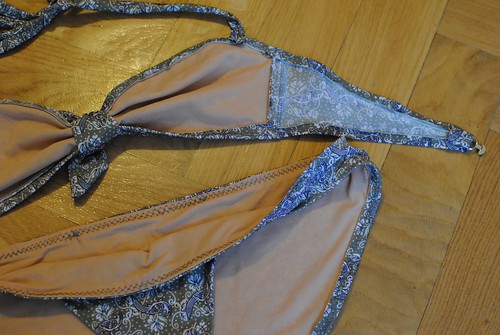 For the top I decided to continue with the same pattern. The truth is that I felt lazy to trace the pattern after the fail for the bottom, and I thought I could play a bit with the shape of the already made pattern to adjust it to my preference. I traced my pattern using those instructions and my measurements and I made my first modification. I reduced the sides from 10 cm to 8. Ten seemed a bit too much for my liking and I was right, this mod is not one that I regret. 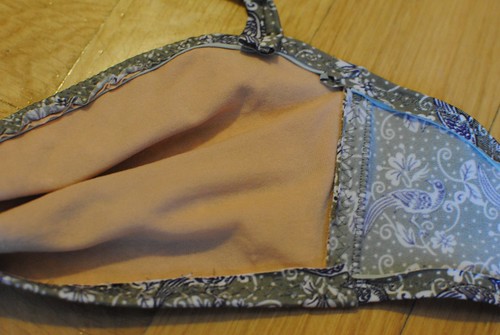 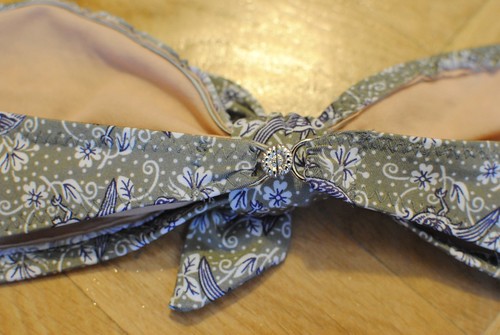 The other modifications were made along the way, adjusting here and there if I didn’t like the fitting. A clear one was the total length of the top. The fitting was wrong, too loose on my body, so I trimmed one inch from each end. Much better. I tried it once again and the front didn’t convince me at all. It looked floppy, handmade, loose. So instead of having the elastic just at the half  top part, I placed it along the complete front, from top to bottom. Like that it seems to hold my breast much better. Even like that it was like there was something missing to make it complete. After some thought I cut a stripe of fabric of 10 cm x 50 cm with pointy ends, folded it length-wise and stitched along the edge, leaving a gap at the middle. I trimmed a bit the seam allowances and turned it inside-out. I tied this around the middle part of my top with a double knot. Now, this looks much better! 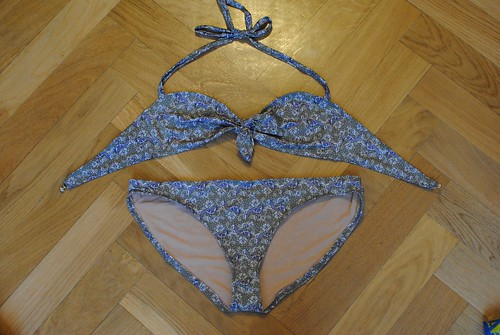 I also made mistakes in my execution, but as this is just a muslin for a second bikini I don’t mind too much. We also need to learn, and for sure we do it from our mistakes.

After making this muslin, I know I will definitely wear it before making my second bikini. In part to test it, but also because I like how it came out. Off course I’ll make some mods for the next one, and for now, they will be: 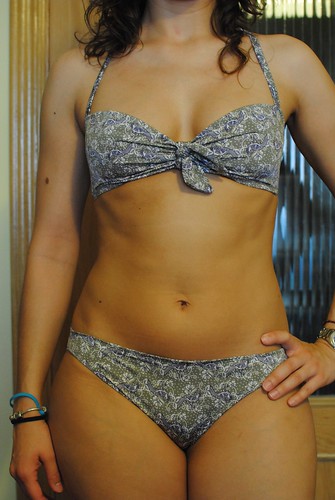 After some wears I’m sure I’ll come up with new modifications. I’ll let you know.