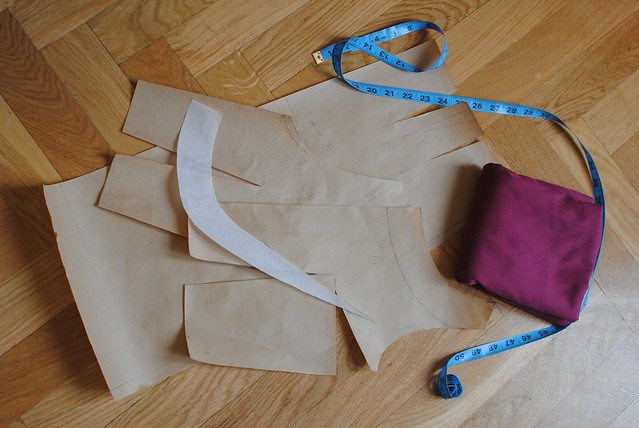 This topic has been in my head for the past months. I’ve been following a course for the last year about pattern drafting. It showed me a world of infinite possibilities but also with more than one issue. Later on I tried the world of just following a pattern made by someone else and here I also found vantages and disadvantages. My pattern drafting classes resume in September, and I’m still not sure whether I’m going to continue or not.

My first garment was a skirt. I don’t know if it was the pattern or the teacher skills, but it came out quite large. Some other people had the same issue, so I don’t think that time it was me. Later on I discovered some other issues, like some corners where they shouldn’t be just because I did not respect the square angle rule. I didn’t because nobody had explained that to me.

After being a bit thrown away by these little problems, I was also a bit abashed by the lack of neatness of my technique, and here the patterns I bought later on gave me the key I needed (thanks, Tasia, the first patterns I followed were from you). What made me make the leap was the A-line skirt Craftsy class. That showed me a whole world beyond my knowledge.

I think pattern drafting has infinite possibilities, as I’ve said, but it’s also that it should be accomplished step by step. The course I follow is very attractive, because it allows you to start making a skirt from the first class, and the teacher will help you to make later on much more complicated garments; but that’s a double-edged sword. It creates the illusion that you can make very nice things “like the one in the picture”, but you will make stupid mistakes because you’ve missed the basics.

Following a pattern gives you less freedom and you will need to perform some modifications to adapt it to your body, but with a little bit of attention and reading about pattern drafting and sewing on the net, will make you grow. And it will give you those basic techniques that make a garment a professional look.

With all this, it’s still not clear to me what I prefer. I guess that lacking creativity doesn’t help. I think you need to follow lots of patterns and directions to be able to achieve good results on your own. That’s what I’m not sure if I will continue the course this fall. It eats more than two hours each Monday and it’s also an investment of money that I could put somewhere else, which I’m already doing, and with a full-time job and the rest of the amenities of life it’s very difficult to find the time to work on these two kind of garments that I want to make.

That reminds me of how I started knitting. I just learned the basics on internet (mainly youtube) and then I built it up myself just following patterns and experimenting. When people see some of my sweaters they often exclaim that they look gorgeous, but deep inside I know that I just followed a pattern. In some cases, experience has allowed me to make  the necessary modifications to adjust it to my body and my liking, but in the end, it was just pattern following. With knitting, the beginning is just learning two different kinds of stitches: knit and purl, and maybe that’s why I found it easier to start on my own. With sewing that was an unknown world and I needed somebody to hold my hand and walk with me. Maybe it’s time that I start to walk on my own and decide which path I want to take.

How has it been for you? Any advice for this wanderer?