I finished this dress two weeks ago, just after coming back from Belgium. For a while I thought this dress was doomed, since due to several causes, I had to take a couple of loooong breaks due to my stupidity (not really, but I’m sure my mind was somewhere else) and our holidays. Sometimes it’s so nice just to go back to routine and keep stitching. It’s also that when I start a project I like to work on it from the beginning to the end. If I get stuck somewhere I need to plow forward, otherwise I’ll never finish it and I would be unable to start a new project. Off course, this doesn’t happen with knitting, since I could have up to three things on the needles. Don’t ask me why I make this involuntary distinction. Probably because sewing tends to be a lot more messy and two projects at once means double the mess eating me in this 50 square meters  😛

But let’s go back to the Lonsdale dress: 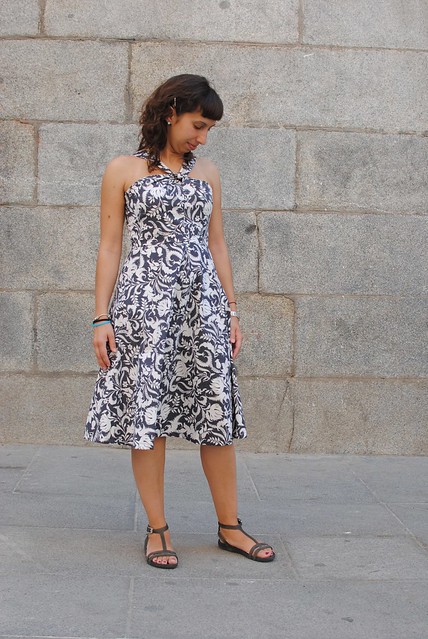 As I’ve said before, after trying the unfinished dress I decided to shorten the bodice 3.75 cm. In fact the dress waist originally sat on on my natural waist, but I liked the effect of it sitting just above it. My measurements corresponded to a size 6, but after making two muslins, I decided size 4 suited me best. The dress is very comfortable, and this fabric has a bit of give, but I wonder if next time I should go for the next size since the dress waist is higher than my natural waist. BTW, the fabric is this one from from Westminster Fabrics. It’s a cotton quilt, but with more drape than regular ones, and I also wanted some structure. 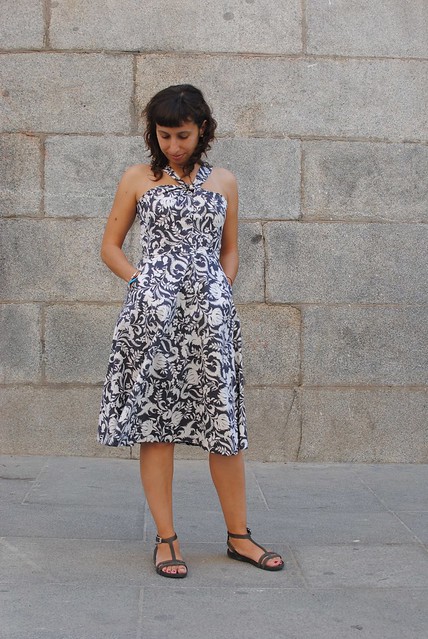 I love the fact that it has pockets to put inside a couple of bobby pins waiting for your hair to get dry, or some coins to buy bread, or your keys, or the card from that special shop you’ve just discovered.

It also looks supper nice from the back, hugging your upper body and flowing around your hips, creating a very flattering figure. Despite my short height (I’m scarcely 5’2″) I didn’t have to shorten the skirt. I shortened the bodice and I like my skirts just below the knee, so after several tests in front of the mirror I decided to let it be as it was. 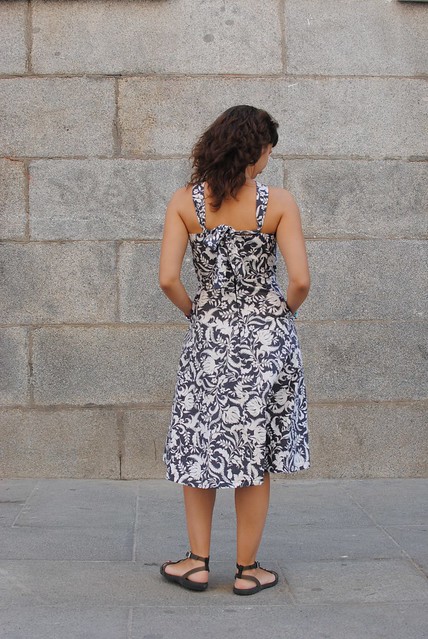 And you would wonder… Why has it taken me so long not only to take this pictures but just to wear this dress? For one thing, this time Koen took the pictures, but normally I do it by myself at home with a tripod and my camera timer (yes, running, kicking my tripod and starting all over again). The bow at the back is a cute and sweet detail, but just try to tie it by yourself and you’ll realize that yeah, it’s possible, but straightening it up and nice is not so easy. After two weeks subconsciously ignoring this dress I realized that I needed to ask Koen for help to make the knot a bit better than my first try. 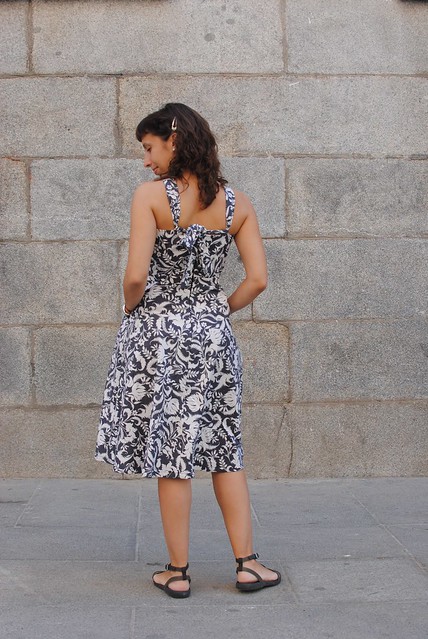 This  pictures were taken just outside our place yesterday afternoon, after walking all morning around El Rastro looking for something for Koen. If you’re wondering why I’m looking down all the time is because there are no decent pictures of me looking somewhere else. The dazzling light almost blinded me, but you cannot see it because I’m standing in the shade. Note: if you have to take pictures at 4 pm on a very sunny day, just do it in the shade; they will look better than those burned ones with the sun directly on your eyes and strange shadows.

I’ve followed Tasia’s instructions to avoid having a scratchy zipper end after being cut, since it was too long for the dress. The result is neat neat neat. 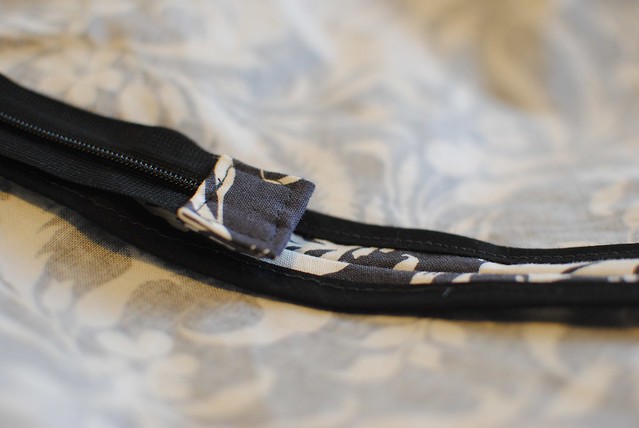 All in all, I love the dress. It’s airy, comfortable and flattering.  Despite all my troubles to finish it (like forgetting to cut pieces of it) it’s a very easy pattern, and I found no complication about its construction whatsoever. As usual, Sewaholic patterns and instructions are great, and you have all the necessary notches so that putting this together is easy peasy. As I’ve said, for next time it’s possible that I make a size 6, at least for the waist, since the dress waist is higher than it was meant to be. We’ll see. Maybe next time my muscles will be even more developed due to capoeira and I need a dress 3 sizes larger (I hope this DOESN’T happen).

And one last picture. I don’t like this one so much, but it was the only one where I was not looking at the floor and I have my eyes a little bit open. 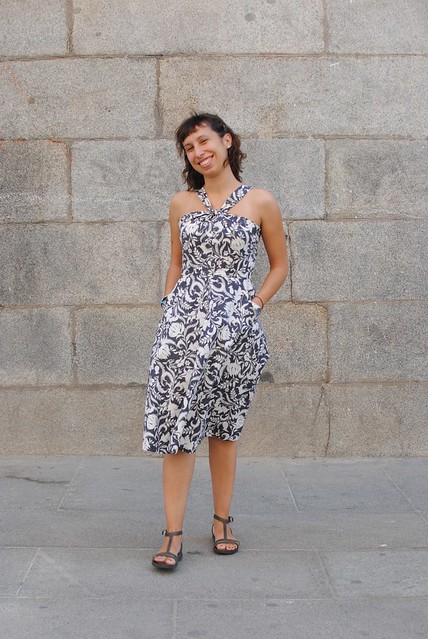