This past Wednesday we went out for dinner to celebrate not only my friend Annalisa’s birthday by also the birthday of one of the guys from our capoeira class. He’s from the same region as me. We don’t talk a lot though since he’s quite younger than me but he’s a great boy. His capoeira nickname is Borboleta (butterfly), so I decided to make him this: 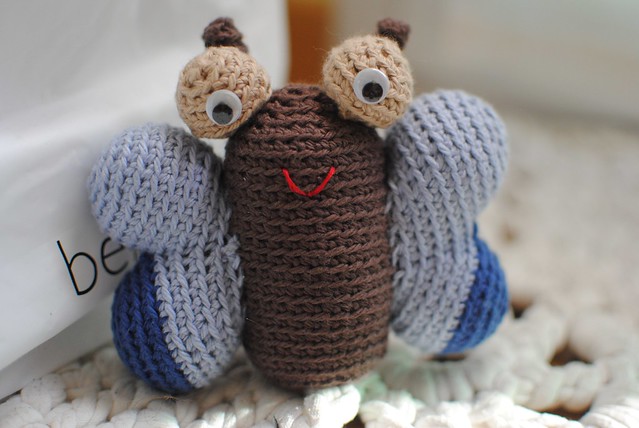 There are lots of butterfly patterns in Ravelry, but I didn’t browse too much because already from the beginning I wanted to make this one from Freshstitches. She has great animal and monster patterns with a funny cartoon vibe.

Nowadays I don’t enjoy crochet so much, although it was the first craft I learned and the first one that saved me from my stress. When I talk to people that knit and crochet what I hear most is that they prefer crochet because it’s easier and because it feels better for their backs and necks. And it’s kind of funny, because it’s just the opposite for me. Knitting feels painless even after several hours, while with crochet I usually get some pain in my right hand. Nothing too bad, but I feel it gets tired quite fast and my neck feels also quite uncomfortable. After some thought I discovered why this discrepancy. It’s true that when I started knitting I mimicked my grandmother’s English style, but switched fast to Continental and never went back. Somehow it feels much more relaxed and I don’t need to bent my body in strange ways. And the people who tells me that knitting kills their backs and necks are throwers (they knit English style). In Spain few people use circular needles, and those long straight ones are specially convenient for throwers since they tend to stick them under their armpits. That’s what I see over here and that’s what I remember my grandmother doing. I re-learned knitting in Brussels, with people from Croatia, Finland and Sweden, and Continental style was just more popular among them. And probably that’s why I picked up that style.

Another thing is that when I knit I barely need to look at my knitting. I do it from time to time, especially if I’m doing lace or cables, but generally I can go blind and watch something in the meantime (I love that); but with crochet I need to look whenever I start a stitch. I don’t need to look during the whole process of making a stitch, but I need to look at where I stick my hook into. Off course I can also watch a TV show like this too, but it’s a less mindless process.

This is just to explain why I barely crochet now. That and also because I mostly enjoy making clothes and I prefer the look of knitted ones. 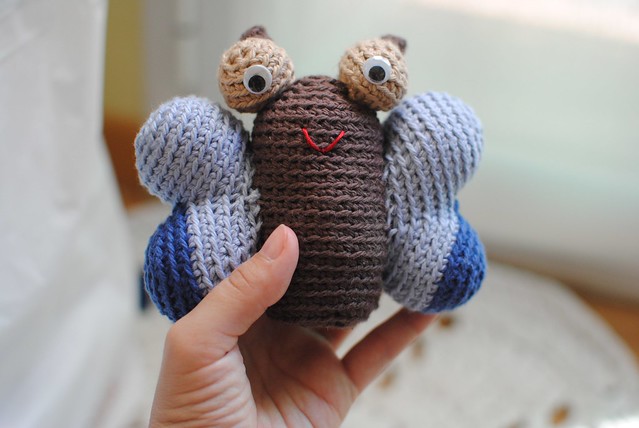 And by the way, he loved this present, hugged me profusely and said in his most candid tone: “I really know that you love me like you were my mother”.  Well, that would explain why I felt we were in different worlds. Different ages, yes, but also different generations?