OMG, when was the last time that I posted a finished project here? I have some to show you that I finished about last month but I’ve been too busy to blog about it. Pictures were taken almost four weeks ago but stayed in my hard drive until now just because life is very busy right now. I’m having so much work that after 6 pm I can’t bear to look at the computer save for watching some meaningless series. But fear not, here you have the first set of finished garments. 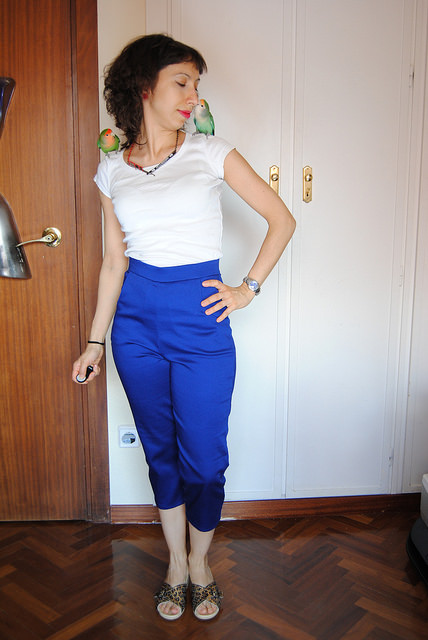 These are Gertie’s Butterick  B5895 pants. Since I didn’t find the printed pattern close by I bought the PDF from McCallPattern.com and they redirected me to PrintSew.com to download the pattern. Here the nightmare started. They don’t provide a PDF file, but a PDC, which is an encrypted PDF for which you need to install a program, LockLizard, and download a license from PrintSew. I printed the pattern last year after I just bought it, but I didn’t have the chance to sew it until now, and since I misplaced some of the pages, I had to reprint them again. I still had the LockLizard installed on my Mac, but my license did not work anymore, so I had to send an email to PrintSew and wait for them to come back to me the day after. I wanted also to mention that the pattern is 48 freacking pages, 8 of them totally blank, and quite some mostly blank as you can see here: 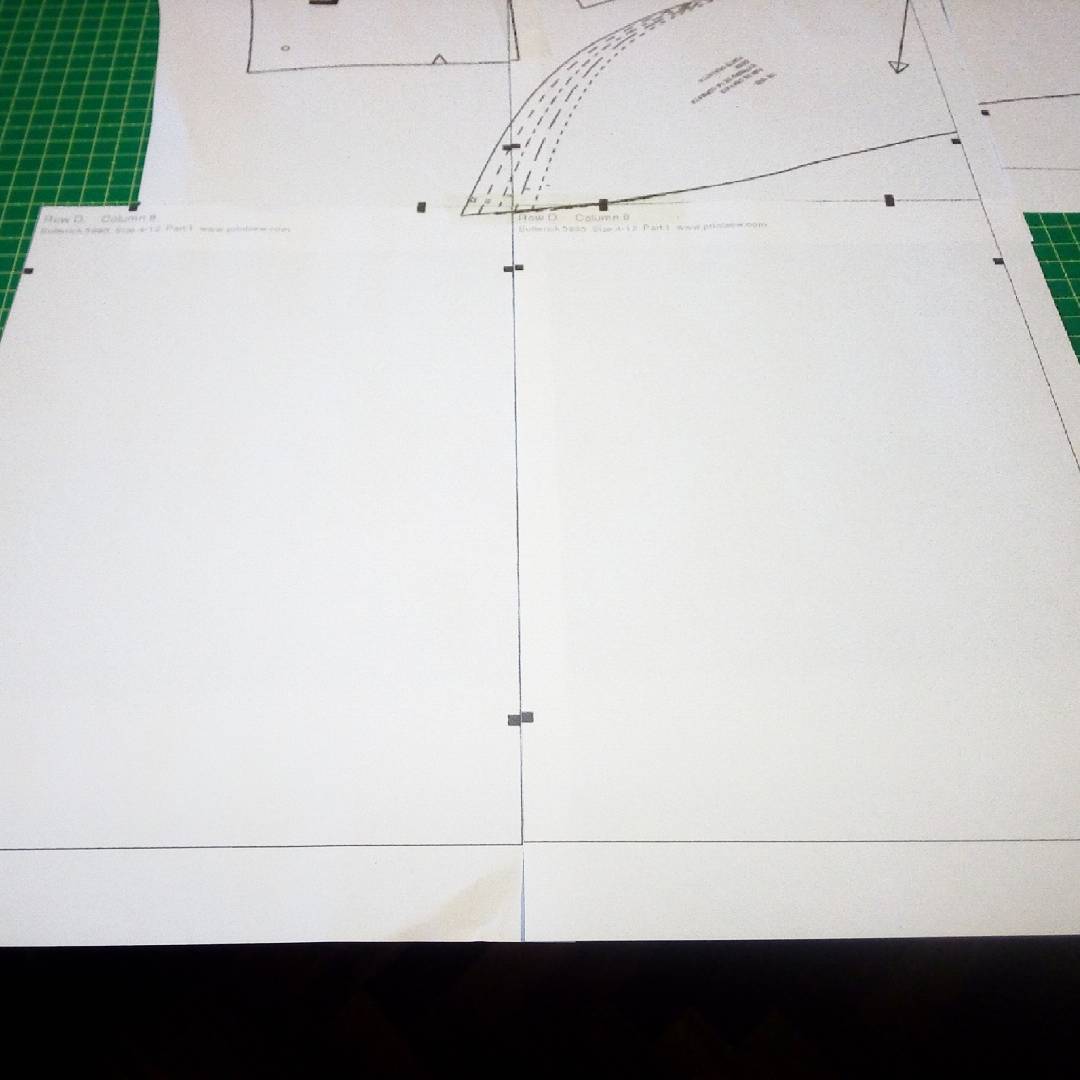 According to my measurements I should have made a size 12, but after measuring the pattern pieces at the hips and waist I went for a size 8, but I had to make a full inner thighs alteration (as seen on Cation Designs blog), adding 2 cm to each pattern piece (4 in total). 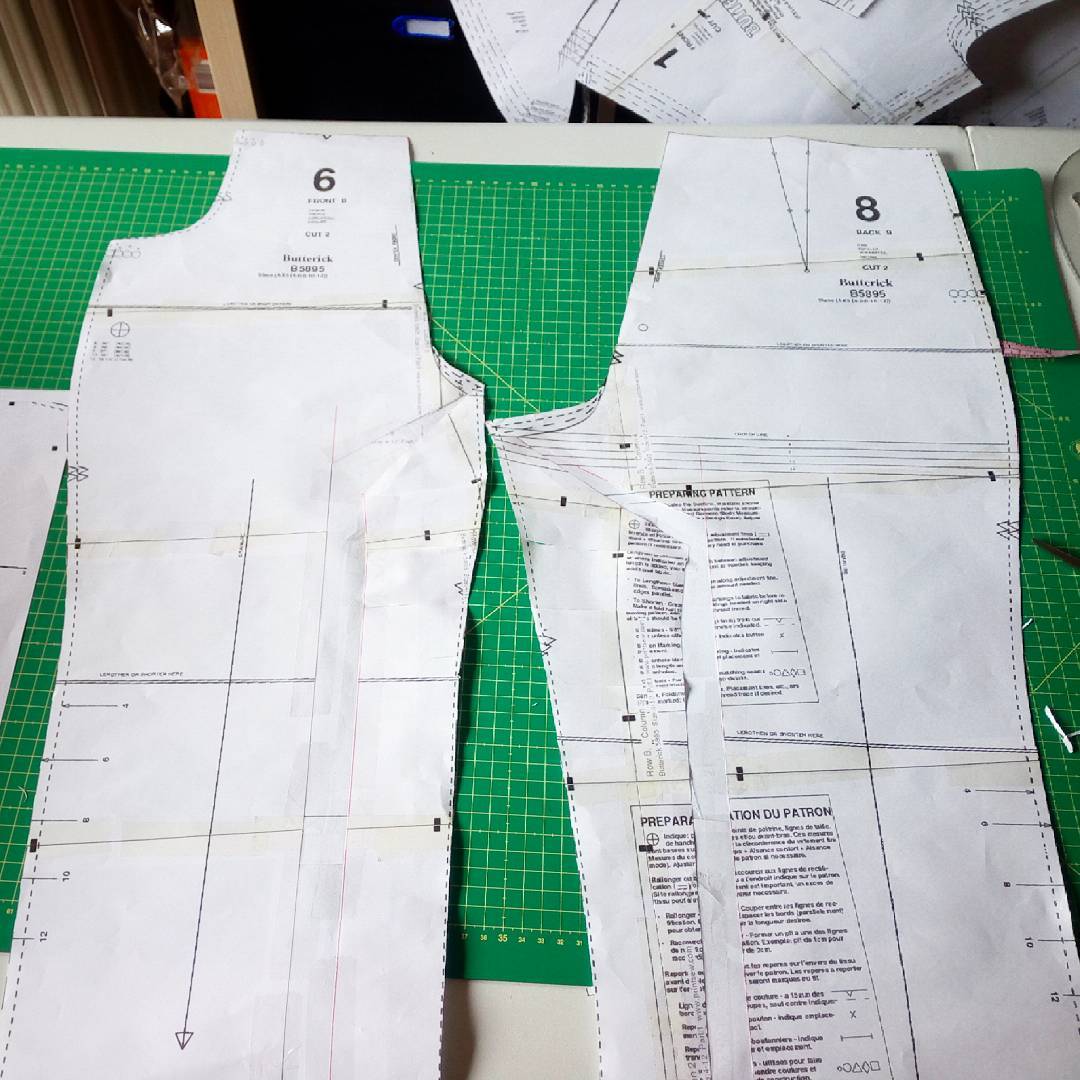 I also shortened the pants around 7 cm and tapered the legs after they were already sewn. 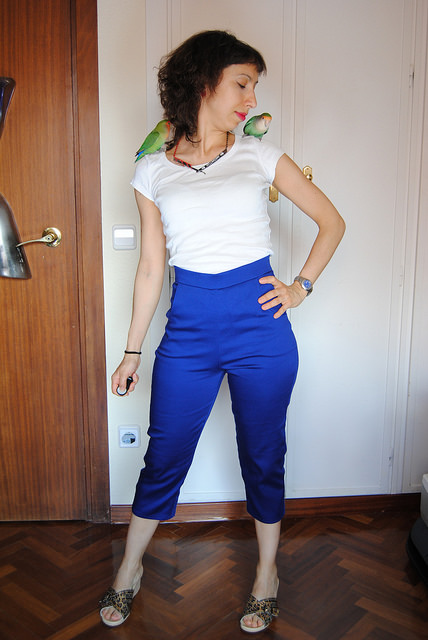 The fit is not bad, but if I don’t pull them up vigorously I get horizontal wrinkles, meaning that the waist is too high, around 2 cm higher than my natural waist. Nothing too surprising, since I have a short torso due to being petite. 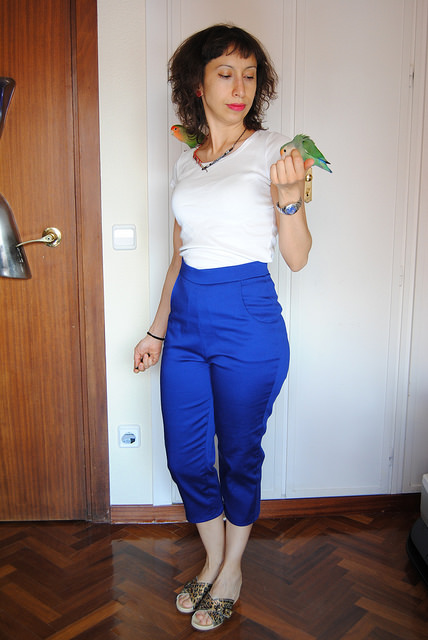 I thought I was going to need more space for the bum (as it usually happens) but the stretch cotton sateen helps here and I don’t feel constricted. But look at those wrinkles. I definitely need to shorten this for next time. Well, this is just a wearable muslin. 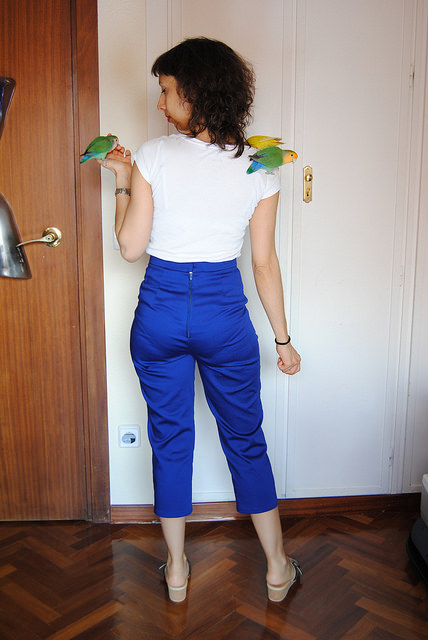 Even though it’s just a muslin I decided to serge the edges so that I can wear this without fear of it getting disintegrated. The left part of the zipper is a little bit wonky. I should probably interface this next time or just use more wash away quilters tape). 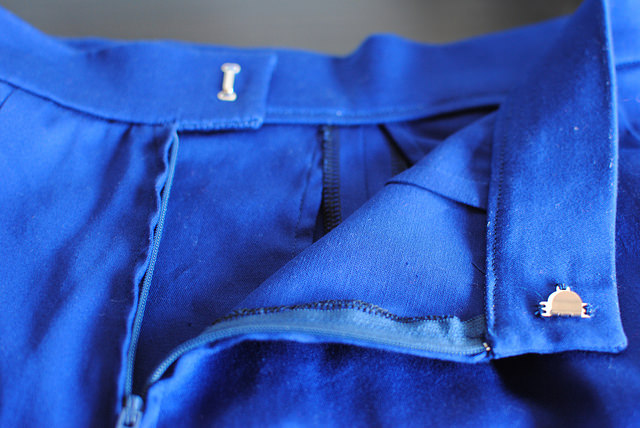 When I started sewing my garments insides were a mess. I take now the effort to make them neat, and with a serger it’s easy peasy. 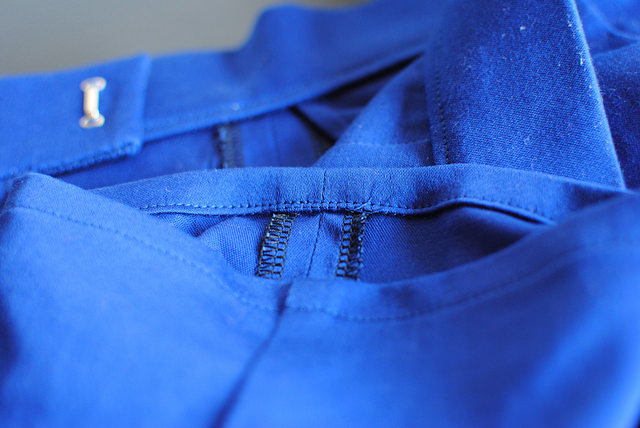 Pockets are a value added to a pair of pants, even though these feel a bit weird because the waistband sits too high. 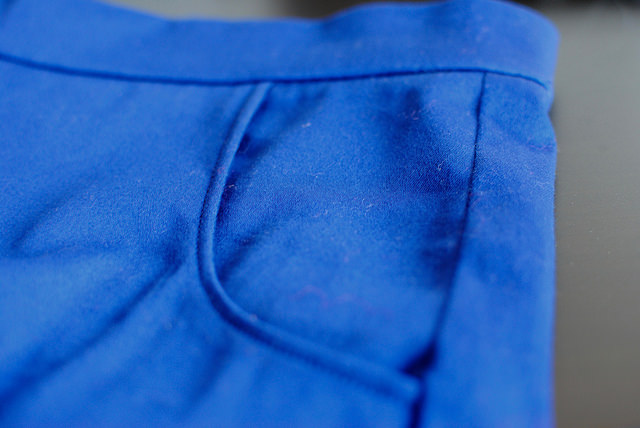 And here is another garment I wanted to show you this time. It’s Hetty by Andi Satterlund. I attempted to knit this cardigan just after it was released, almost three years ago, but the recommended yarn was difficult to find in this part of the world, and I just saw it in maroon. No my favorite color but I gave it a try. I failed miserably, it’s not that I fell out of love with the yarn because I never loved it. It’s just that I started hating it… 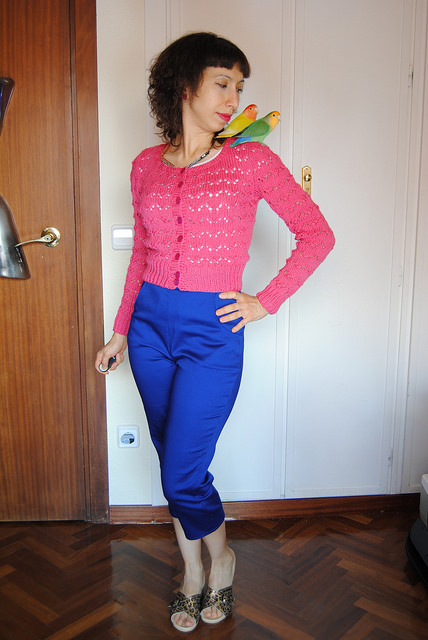 The result was that I abandoned this project for a very long time. I started it again last year with this pink Cascade 220 but abandoned it again after Gerry left us. Just after the summer I retook it again and finished it at the end of last year. Then we had Christmas and moved to a new apartment, so I didn’t sew buttons until almost two months ago. It’s one of the things I enjoy less, so I tend to procrastinate here. I know, ridiculous. 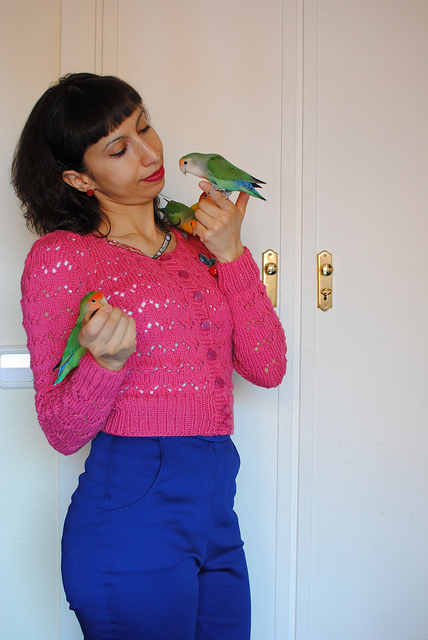 After all the time it took me to finish this cardigan, I am very happy with the final result and the fit. I had my doubts about what to do with the repeats at the “seams”, but after checking several projects in Ravelry, those parts (sides and where the seam would go on the sleeve) are never perfect, since the pattern repeat is broken by plain stockinette. I was bothered by it at first, but I learned to live with it. It’s just a design feature!

I added two repeats to the sleeves to make them longer, as I always do with Andi’s patterns (my wrists get cold!). The bulge you see on the left one is my watch under the cuff. 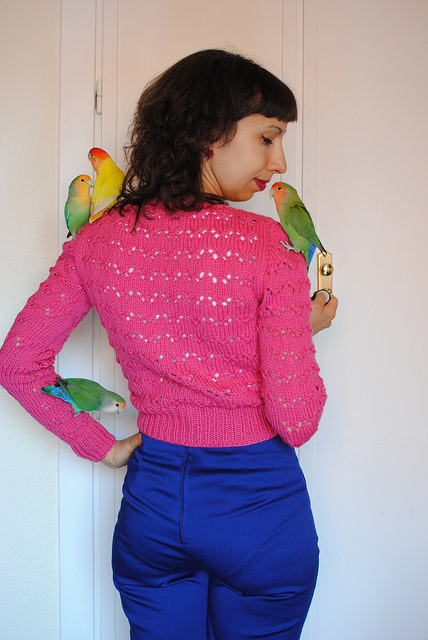 Our four lovebirds are often perched on me at the same time but you’ll never see the four very close together, except for Billy and Daisy, because they are a couple since a very tender age. They are very territorial creatures and they tend to have quite a bad temper. I love them anyway and enjoy their cheeky nature. 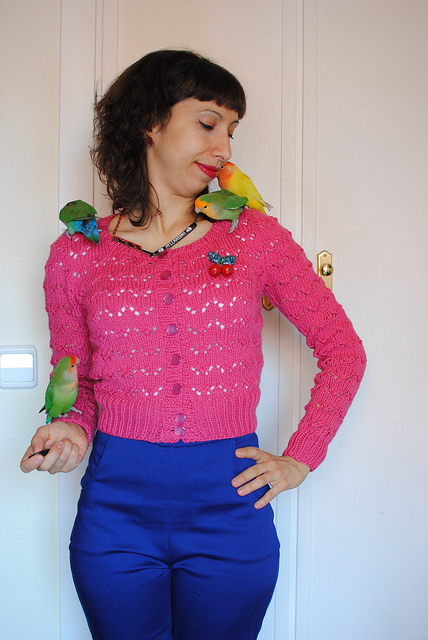 And I finally solved my lighting issues. There were two issues in fact. First, I should explain that I mainly use two lenses for my photoshoots. I like my 35 mm F1.8 for close shots, like when I want to show a cardigan or a top. It’s a fast lens and I don’t need a lot of light. But for complete body shots I need to use my 18 – 55 mm F3.5-5.6. This lens needs more light so it’s restricted to limited conditions. When using the remote I usually shot in A mode, so that the camera auto adjusts if light conditions change (a cloud at a certain moment). But the last time I used this lens my pictures were very dark. I found out that my camera somehow miscalculates when using this lens, so I decided to shoot everything in manual this day for both lenses. Another issue that I had to correct was the non-uniformity of the light. The photoshoot location in my previous apartment didn’t have this problem, but my current sewing room receives much more direct sunlight and they tend to be dark patches in some places. So I bought this little gadget that folds to a very small size and it seemed to help. 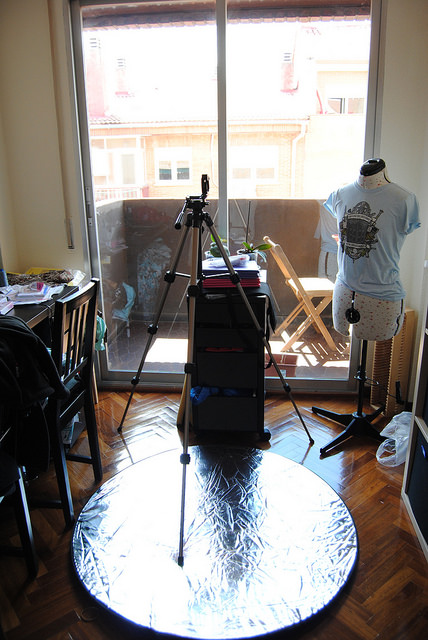