I’m not a Xmas person, but this is one of the two times of the year that I visit my family and friends. I usually travel with the birds, since the cost of a plane ticket plus the bird residence is a bit more expensive than just renting a car and taking the birds with me. And I know that it’s hard on them when they’re separated from us. But traveling with them is also stressful. I want to make sure that they are fine, and six hours in a car is not easy for them either. And there is also the mess they create. Last time I traveled with them I got a call from the rental company to complain about a white stain. I tried to clean it before returning the car, but it seems I was not able to remove it completely. I left the company mulling over the origin of the ‘white stain’, and decided to avoid this for future trips. 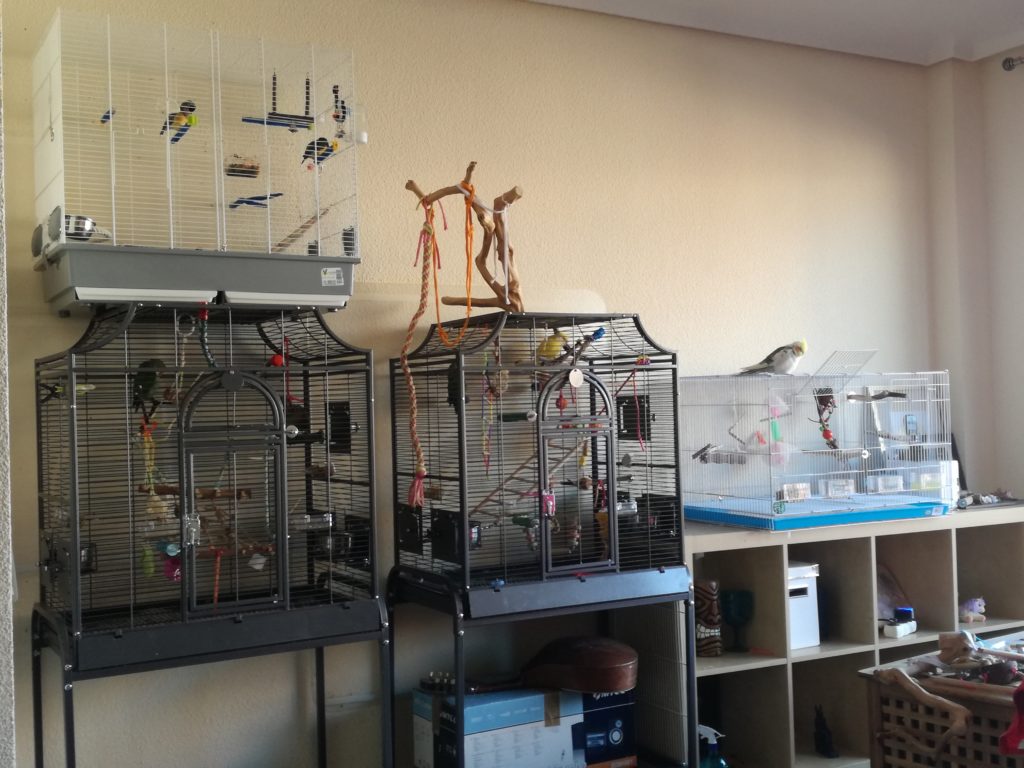 The black large cages are the lovebirds’, two birds in each one. These cages are great, spacious, sturdy and can be cleaned easily, but they are not practical for traveling purposes. I bought two cages like the one on the right. The are not exactly removable, but they can be collapsed and stored flat. The size is ideal to be transported on the back seat of a car, and you can insert a division in the middle. And they were cheap. I just needed to make a bag to protect the car seat from any bird mess. 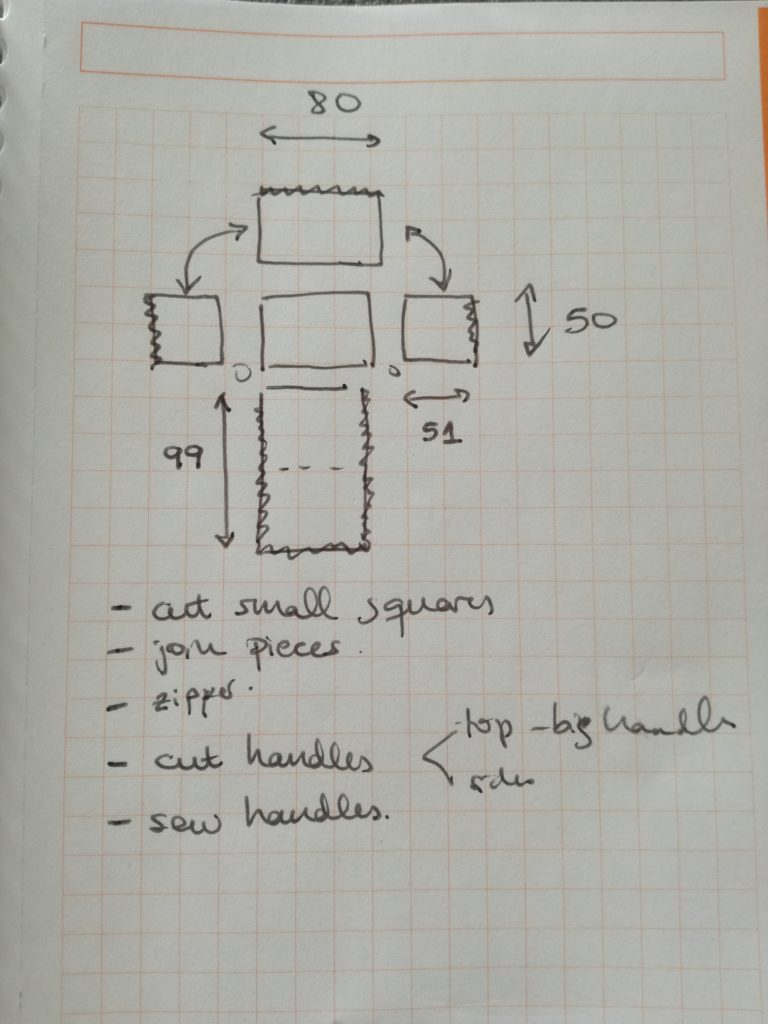 I made a sketch to plan for it. I wanted a bag that could be easily used to cover the cage without too much fuss, and that would allow a ‘window’ for the birds to be able to see me and their surroundings while in the car. I had some beige canvas gifted by my sister some years ago. It is a great fabric to make handbags, I just wasn’t in love with the color, but for this project it was perfect. I attached a handle on each side and a triple handle on top, so that the bag could be easily transported by one or two people. I added a couple of cm to the measurements to have some ease. 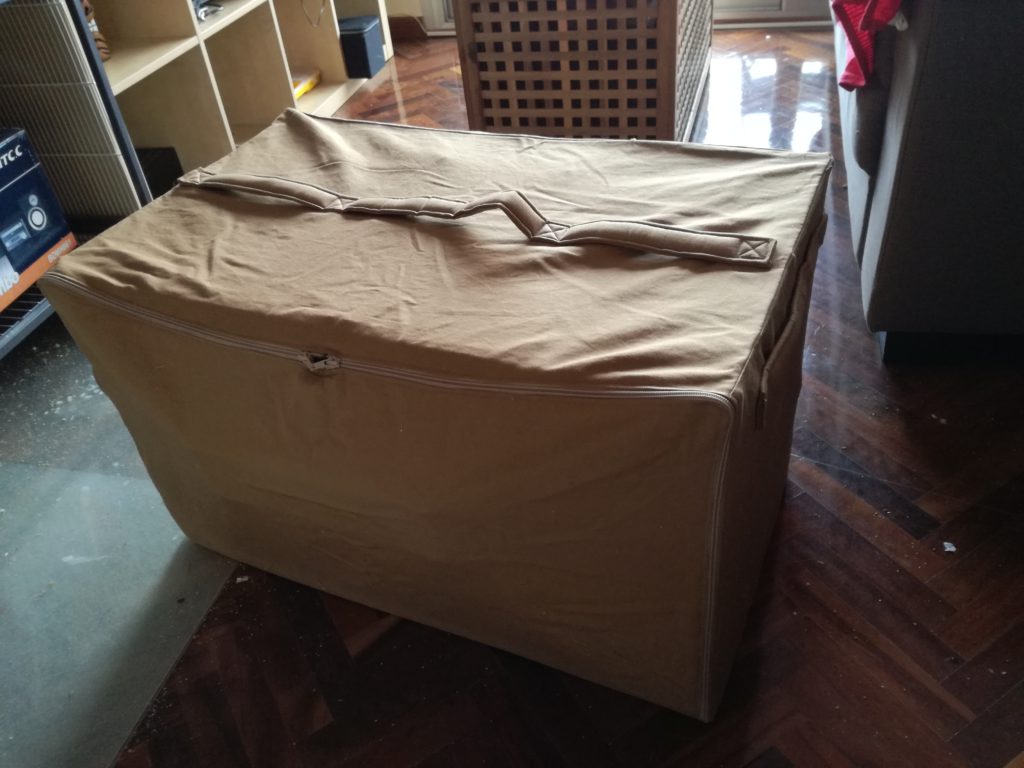 The bag came out exactly as I wanted it, and it could be put on the cage in less than two minutes. I reinforced the inside of the bag where the handles are attached with extra stiff interfacing, typically used for handbag bottoms.

Here you can see it with the ‘window’ in action. At first I wanted to have just one zipper that could be closed inwards, and I actually got one but it was too short (I was stressed out and sleep deprived when I purchased it) and I could not go to the same haberdashery again, so I had to get two zippers, which also works fine. the zippers join in the middle, and run downwards and backwards so when completely open, the bag is almost flat. 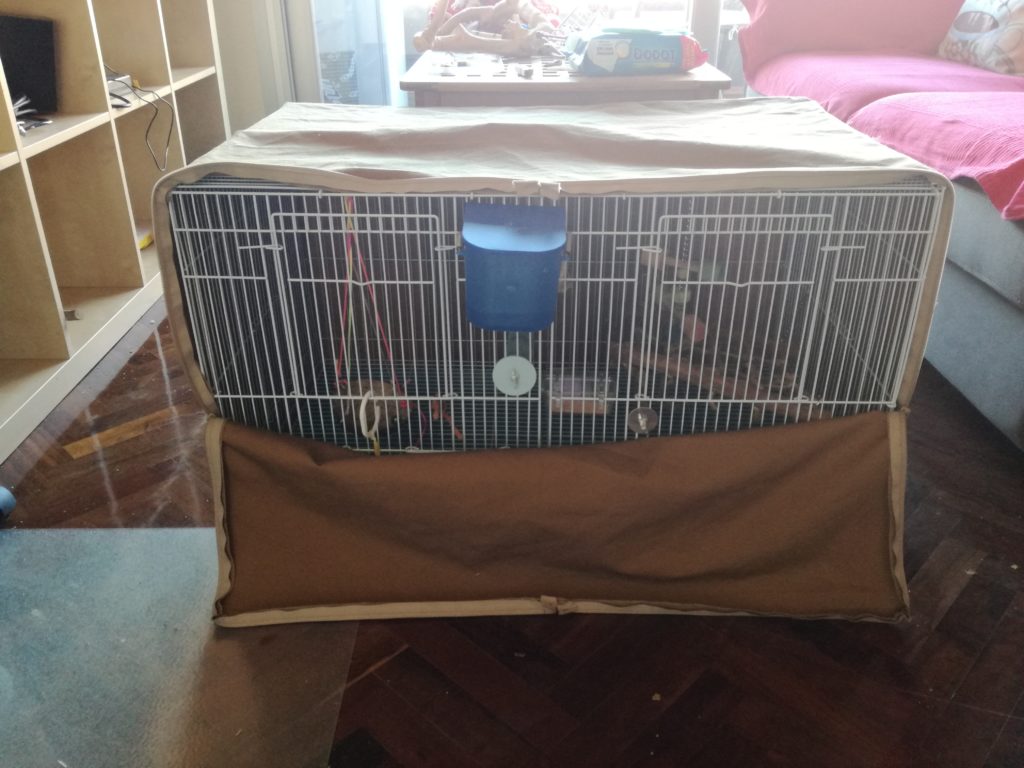 Here the cage installed in the car and with the zips open. The cardboard contains the other cage, collapsed. I have the impression that the birds traveled more comfortable this time and could even doze off at the back of the cage. I had no issues with dirt from the birds, so I call this a win-win. 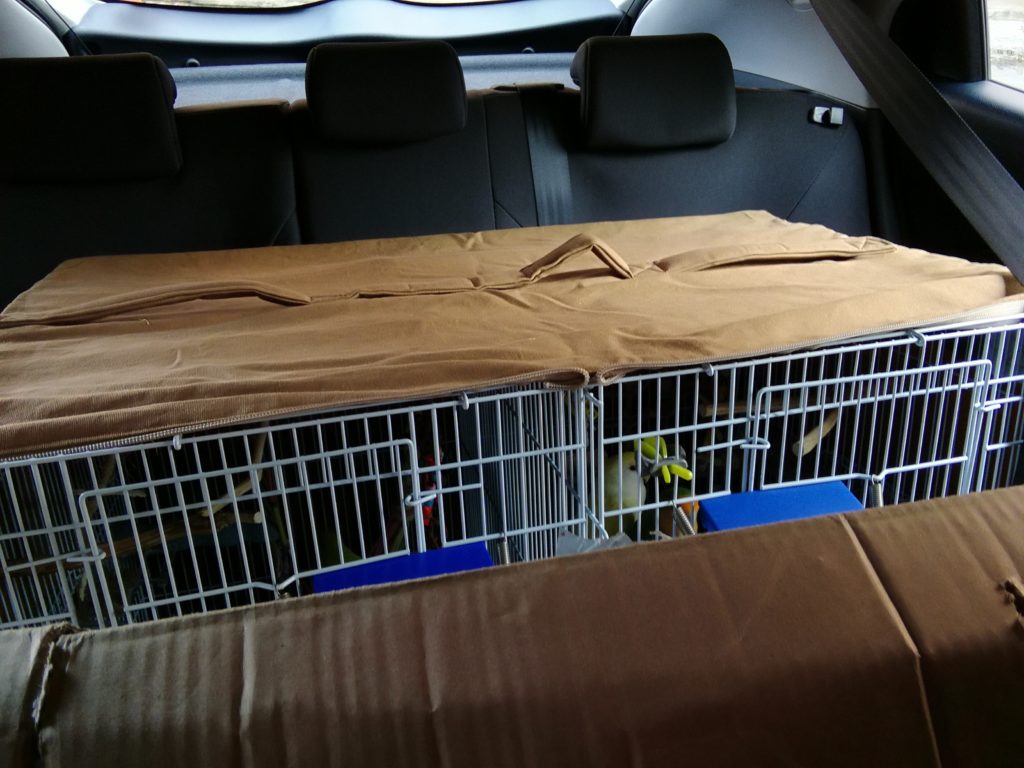 The construction of this bag was as easy as joining rectangular panels and adding a zipper. I just needed to pay special attention to corners and make them match. At first I wanted to line the bag to aim for a cleaner finish, but after working on Paula’s Hoodie and with the imminent trip, I was in a hurry. Now I think the bag is good enough as it is, light, sturdy, and easy to storage.

Another thing I had to solve for my trip was the food. With my restricted diet, I just can’t stop and eat at a restaurant or eat some cookies. Previous times I went for canned fish and a piece of papaya, but it was messy and not ideal. This time I purchased an Electric Lunch Box for Cars

and I packed some delicious stew. It took about forty minutes to warm up, and the top was not as hot as the bottom but it was wonderful compared with eating sardines. 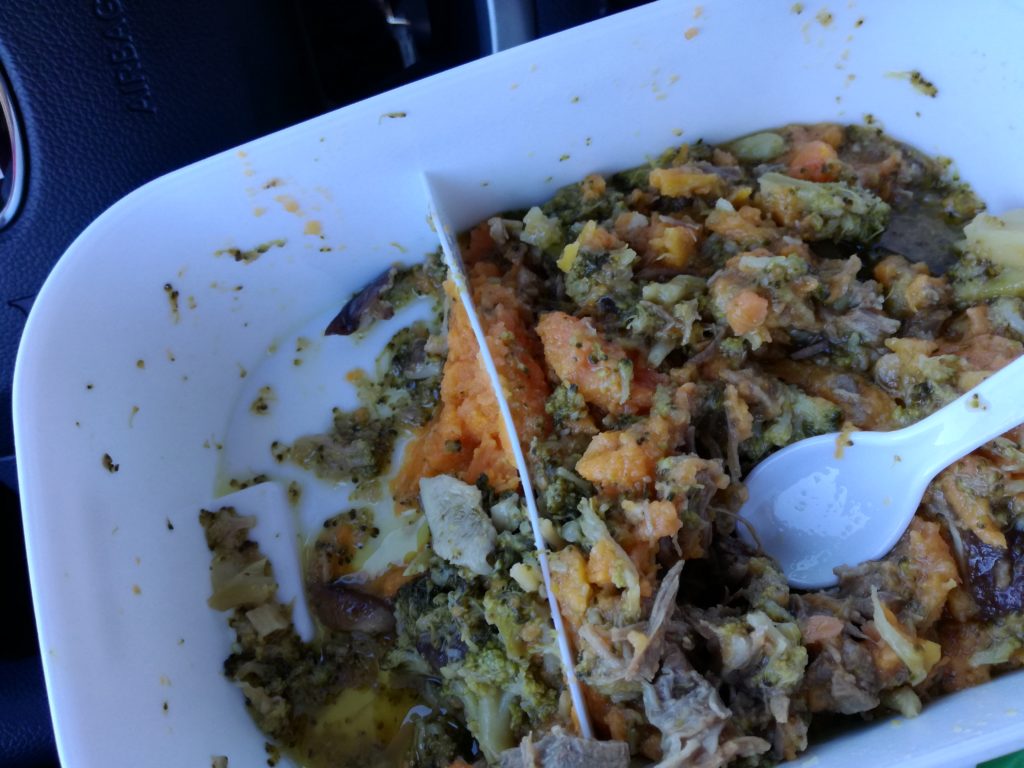 The finches stayed home. At first I was going to leave them at the Vet bird residence, but Sally decided that it was time to lay eggs, and it was better to avoid moving the cage. So we left plenty of food and water and monitored them using a cheap webcam. 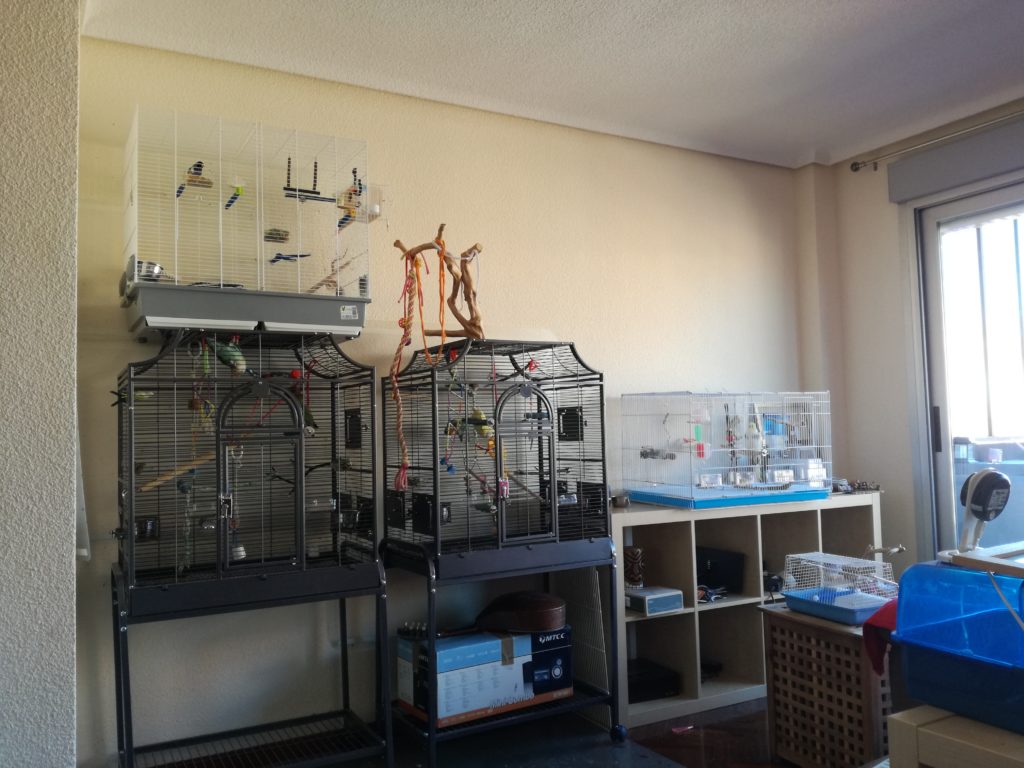 What I really liked from this camera was the night vision. It was a fairly cheap camera and very easy to set up, so I’m quite happy with it and we’re still using it nowadays to monitor the birds when we’re not at home or they are sleeping. 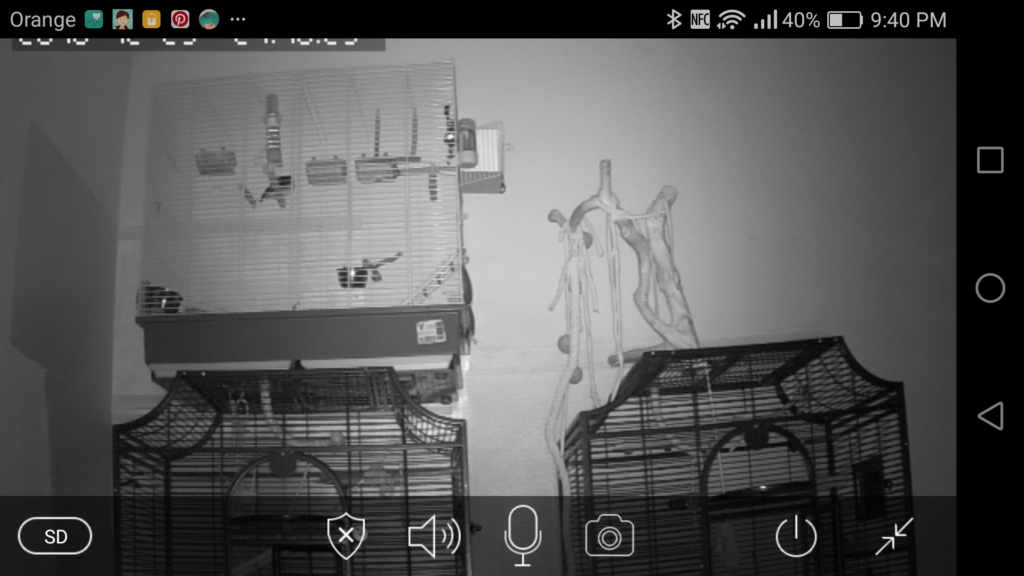 Sally laid ten eggs in total (two of them were before we installed the nest and broke, and other two were buried under the nest material by them), but they were either not fertilized or not correctly incubated, so after completing the cycle, we removed nest and eggs. It was a relief, since Gouldian Finches are usually not good parents, and I rather have some wasted eggs than dead babies. 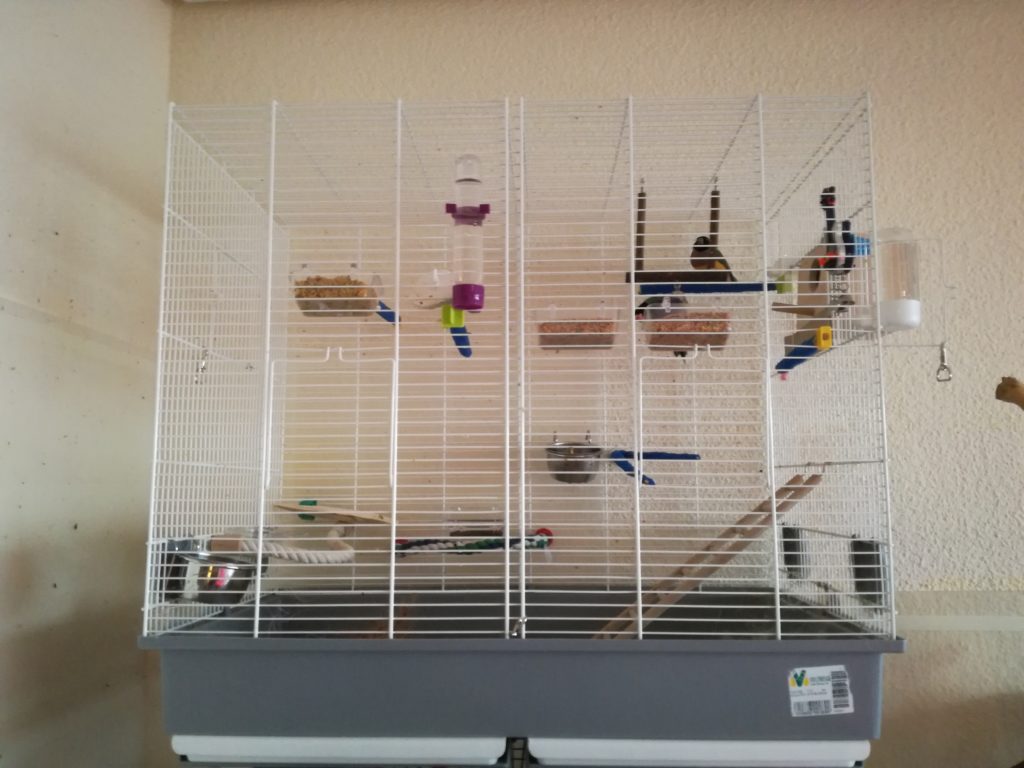 Here you can see a video of Sally a couple of days before I removed the nest. She had a new egg on the way and I was worried that she was having difficulties to lay it, so I checked the eggs, removed them, gave her extra calcium, and waited to see if she would lay this one. After a couple of days, it got reabsorbed, so we took the nest away.

I leave you now with some shots from my visit to Vigo this last Chrismas. As I’ve said, I’m not a Christmas person, but I had a good time.

I used my phone to take all the pictures, so I apologize for them not being high quality. It seems it will be like this most of the time from now onwards, since I have very little time to set up the tripod and the DSLR.